Agencies all over metro Atlanta are trying to tap the same pool of workers. South Fulton is offering a $450 monthly housing program because only 27% of the city’s public safety workers live in the city. Dunwoody now pays cops for their experience when hired. Alpharetta gave officers a 13% raise.

Departments are left with large numbers of vacancies because workers are leaving for the private sector. Among the many causes: A strong job market for workers, anti-police sentiment born from years of discriminatory policing, a pandemic changing the way everyone works.

The timing is bad, as police leaders say they are trying to reform policing in the wake of what is seemingly a never-ending string of officers targeting or wrongfully killing Black people. That includes the high-profile police killings of Rayshard Brooks and Ahmaud Arbery in Georgia.

The staffing problems are a nationwide trend, a mix of retention and recruitment. People are quitting at record rates, many changing careers. The average American worker, who has survived economic downturns and recessions, has never been more empowered. Employees are demanding more leeway and money in the face of suppressed wages. Strikes have also been on the rise.

ExploreSouth Fulton to give some cops, firefighters $450 stipend to live in city

Alpharetta’s director of public safety John Robison said hiring and retention now is the worst it has been in his 20 years.

He’s approved to have 108 officers, but is down 7 cops. Saturday recruitment events that used to draw 160 prospects now only surface a handful, he said.

“We’re all in the arms race in terms of pay,” Robison said.

‘This is a calling’

All levels of criminal justice are feeling the lack of cops. Fulton Superior Court Chief Judge Christopher S. Brasher said “it puts a lot of pressure on the process” when there isn’t adequate staffing.

“The Great Resignation continues apace and it’s tough to fill positions, especially government positions because the pay is not the same as it is in the private sector,” said the outgoing judge.

Gurley said he has turned down private sector money because he loves what he does.

Brookhaven is rolling out a $10,000 bonus, Gurley said. The base pay for a cop with no experience is $48,500. Inexperienced cops take at least two years training with more intensive supervision, which costs time and money.

And it isn’t as much the risk of losing their lives that pushes cops away, Gurley said, as the fear of doing the wrong thing.

Some realize it isn’t for them, he said, recounting one cop who spent a couple years on the force but decided to leave after an officer killing George Floyd in Minnesota made international news.

He said it’s hard to better the department without experienced staff.

In an effort to get officers to stay, he said the department is offering cops a $700 monthly housing stipend. And to attract, a $6,000 hiring bonus.

A cop with no experience can expect $46,350 a year. The department instituted a 4% raise, but city officials also now lets the agency pay cops commensurate to their level of experience.

“Right now, it’s a labor market and people have their pick of jobs,” Grogan said.

When asked what will turn this around, he said: “A lot has to do with the economy as well. When the economy gets tight and jobs are scarce, people tend to move toward government jobs, law enforcement, firefighting.”

Grogan said about 10 of his 64 total positions are open. He said it will be important to “get to the point where we can understand that police officers are not the enemy.”

“We are protectors and guardians and the job they do is so important for our society,” the chief said. “And we do it best when we have people who support us working together with us.”

So why would workers enter law enforcement?

Kierston Hurst, a 29-year-old traveling nurse, was at LA Fitness with friends working out last week. Her friends brushed off the Fulton recruiters, saying they had good jobs. But Hurst was interested.

Deputies told Hurst that she could be a SWAT medic. The Buckhead resident had never thought about law enforcement before, but she took a flier. 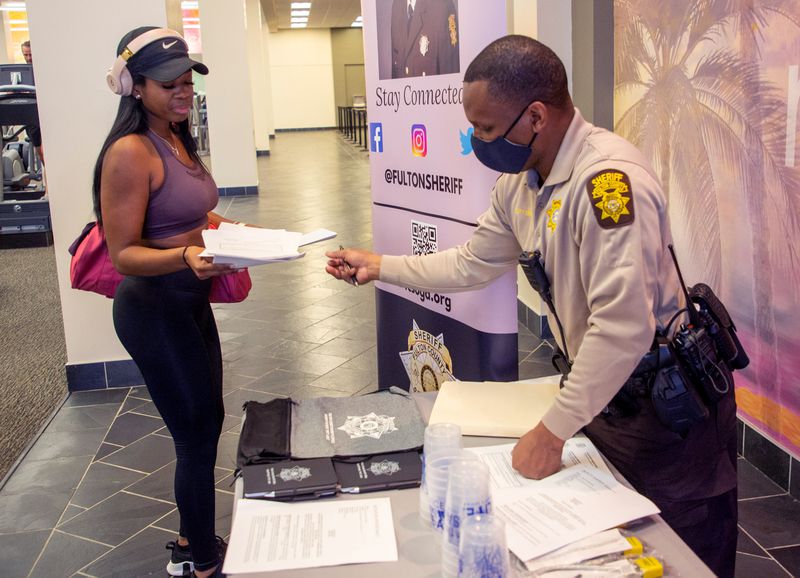 Meo Shialowery, a 34-year-old who works in warehouse quality assurance, came to LA Fitness specifically for the job fair. Shialowery said she has always been interested in policing.

Her sister has worked at the agency for 25 years and slowly has been convincing her to apply.

Shialowery, a mother of two adolescent boys, said she’s interested in applying because of the stability but also because she wants to help children by working in juvenile justice.

The East Atlanta native said she likes her job. “But it’s still not giving back to the community,” she said.

Source: Information provided by each agency