Meanwhile, people keep dying from the virus in the Peach State. Georgia’s seven-day rolling average of newly confirmed and probable deaths from COVID reached 94 on Tuesday, compared to the Delta variant wave’s peak of 133. Total COVID deaths in the state stood at 28,560 on Feb. 12, meaning one in every 370 Georgians has died of the virus since the pandemic began.

ExploreTwo years of COVID: How Georgians have been impacted in ways large and small

This month, President Joe Biden informed Congress he was extending the national emergency he first declared in March 2020 because of the pandemic. The move allows the government to spend extra money in response to the crisis.

“The COVID-19 pandemic continues to cause significant risk to the public health and safety of the nation,” Biden wrote Congress on Feb. 18. “More than 900,000 people in this nation have perished from the disease, and it is essential to continue to combat and respond to COVID-19 with the full capacity and capability of the federal government.”

More than a year after the vaccine arrived, Georgia health officials are straining to convince the unvaccinated to take the shots. The state Department of Public Health set a record when it gave 124,248 vaccinations statewide on April 1, 2021. That has fallen 97% to 3,477 vaccines given on Feb. 21.

“I was so excited the day that I went” to get vaccinated, Lisa Martin said. “At that point, I felt, ‘This is going to really protect me. This is going to give me my life back.’ Why would anybody not want to be protected?”

Georgia’s state government is promoting the vaccines on social media and has aired a dramatic television ad about a 25-year-old man from Gwinnett County, profiled in the AJC, who fought for his life against COVID and eventually received a double lung transplant. At the same time, state health officials are fighting misinformation about the vaccines.

Emory professor Dr. Kimberly Manning runs a ‘no judgement zone’ at Grady Hospital last October to talk to anyone with questions or concerns about COVID vaccinations. More than a year after the vaccine arrived, Georgia health officials are straining to convince the unvaccinated to take the shots. (Jenni Girtman for The Atlanta Journal-Constitution) 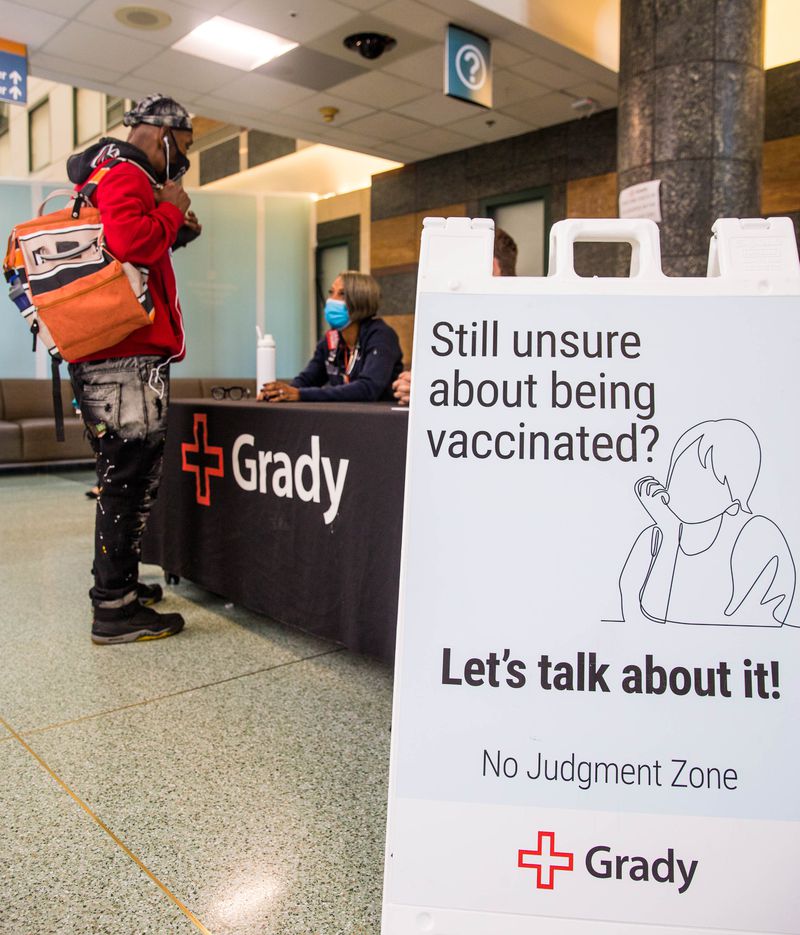 Emory professor Dr. Kimberly Manning runs a ‘no judgement zone’ at Grady Hospital last October to talk to anyone with questions or concerns about COVID vaccinations. More than a year after the vaccine arrived, Georgia health officials are straining to convince the unvaccinated to take the shots. (Jenni Girtman for The Atlanta Journal-Constitution)

“Misinformation, mistrust and lack of trust in government are all driving this,” said Dr. Carlos del Rio, who teaches medicine, global health and epidemiology at Emory University. “We need to depoliticize it. And the way you depoliticize it is you make it part of normal medical care.”

Some people mistakenly believe the vaccines will make them infertile or that they include microchips for tracking them, said Ashley Deverell, a registered nurse and the state’s immunization coordinator for a six-county region in North Georgia. Her region includes Cherokee, Fannin, Gilmer, Murray, Pickens and Whitfield counties. With the exception of Cherokee, none of those counties have gotten more than half of their residents fully vaccinated, state Public Health Department records show.

The disease has claimed the lives of more than 1,400 people in that six-county region. Among them was a popular Whitfield elementary school physical education teacher and an elected county commissioner. 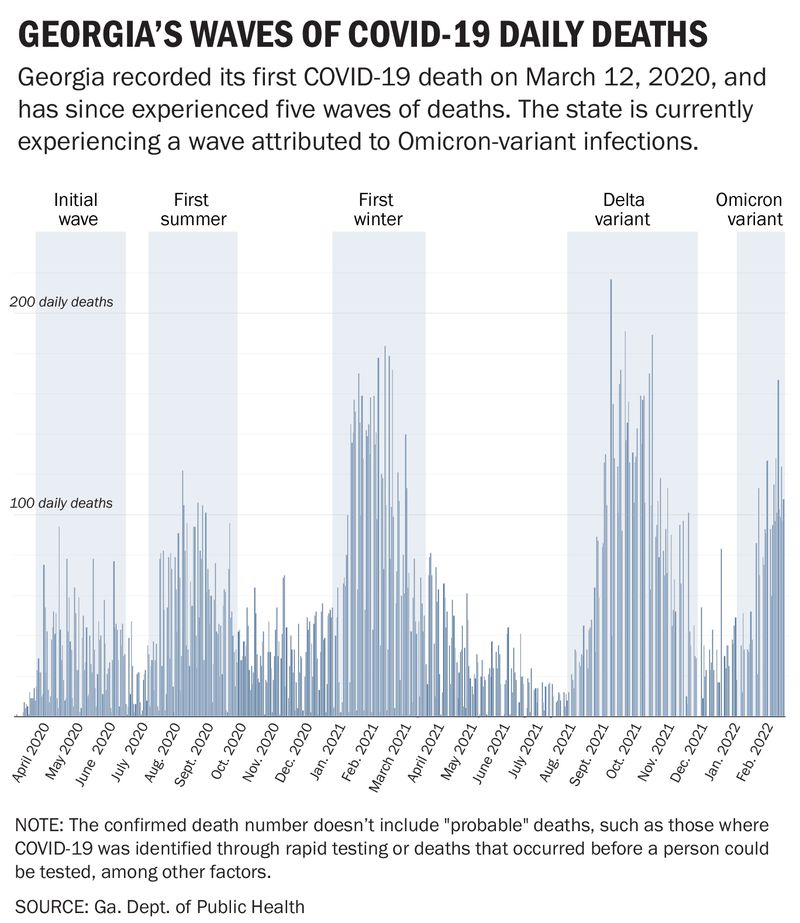 Deverell points to research that shows the risk of hospitalization and death from COVID dramatically decreases for people who get vaccinated. To illustrate her point, she referred to Hamilton Medical Center in Dalton, where more than three quarters of the patients who were being treated there Monday for COVID were unvaccinated.

Initially, the vaccines were popular in Deverell’s region of North Georgia, she said. That popularity waned and then picked back up during the deadly Delta variant outbreak last summer. But it has fallen since then. During the week of Feb. 7, for example, state health officials vaccinated 241 people in her six-county region, compared to 701 on May 6 alone, Deverell said.

“Right now, our health departments are down to a crawl,” Deverell said.

She added that misinformation and mistrust in the community have affected a separate important vaccine effort.

“We usually have great flu vaccination numbers, but our numbers are down a little bit this year,” she said. “We have annual drive-by flu (vaccination) events and we have people who are either not coming or they are asking us before we give the flu shot, ‘You are not giving me that COVID shot, are you?’”

Rural parts of South Georgia have the state’s lowest COVID vaccination rates, Georgia Department of Public Health records show. For example, the rate is 35% for being fully vaccinated in Pierce County, where Lisa and Jeff Martin live. But in neighboring Brantley County, it is 27%. Nearby Charlton, Long and Wheeler counties also have rates below 30%. Chattahoochee County, which is home to much of Fort Benning, has the lowest rate among Georgia counties at 21%.

Jeff Martin recently learned he has scar tissue on his lungs from his own battle with COVID in 2020. His wife, Lisa, is still recovering from her illness. Her hair has grown back and her lung capacity has improved. But she is still doing breathing exercises and suffers from numbness in her shins and the left side of her face. Anxious about getting COVID again, she is perplexed by those who have decided not to get vaccinated.

ExploreComplete coverage of COVID-19 in Georgia

“They are just riding it out,” she said. “I know that they are not trying to hurt me personally. But I take it personally.”

“Obviously,” she continued, “my situation didn’t make the difference. Is this person’s passing — is that what it is going to take to make more people get vaccinated? That’s what runs through my head.”

Her husband has similar feelings.

“I think we have found ourselves in a place where we are so accustomed to the pandemic and are beleaguered by all the efforts,” Jeff Martin said, “that folks just aren’t going to take it seriously anymore and don’t feel any further urgency toward vaccination, sadly and unfortunately. I wish more took it seriously.”