North Port’s disappointment is compounded by this being just the latest in a series of interruptions to the Braves’ spring training plans there.

In 2019, which was to have been the Braves’ first spring in North Port, construction delays caused them to train in the Orlando area for one additional year and play just one exhibition game at CoolToday Park. In 2020, the start of the COVID-19 pandemic shut down the Grapefruit League schedule in the second week of March. In 2021, attendance was limited at spring training games because of the pandemic. Now, the labor dispute.

“While we know it should be spring training (time) and we know we should have lots of visitors and have all this excitement, it’s been kind of sidelined for the past three years,” McDowell said. “This is kind of like a continuation.”

“We’ve been talking about that (series of interruptions) here,” said Bill Gunnin, executive director of the North Port Area Chamber of Commerce. “Like, unbelievable.”

While pitchers and catchers were scheduled to begin workouts this week and full squads by early next week, the full impact of the lockout on spring training communities will be felt if, as seems almost inevitable, at least some exhibition games are canceled. They are scheduled to begin Feb. 26 and run through March 29.

“It’s frustrating. We want our first full year of Atlanta Braves spring training, and it doesn’t look like it’s going to happen this year again.”

Losing part or all of the exhibition schedule “would have a major impact on the local restaurants and shopping,” Gunnin said. “It is a big hit economically, but as far as support for the Braves, that won’t wander at all.”

A member of the grounds crew prepares the field at CoolToday Park during the early morning on Feb. 12, 2020, in North Port, Florida. 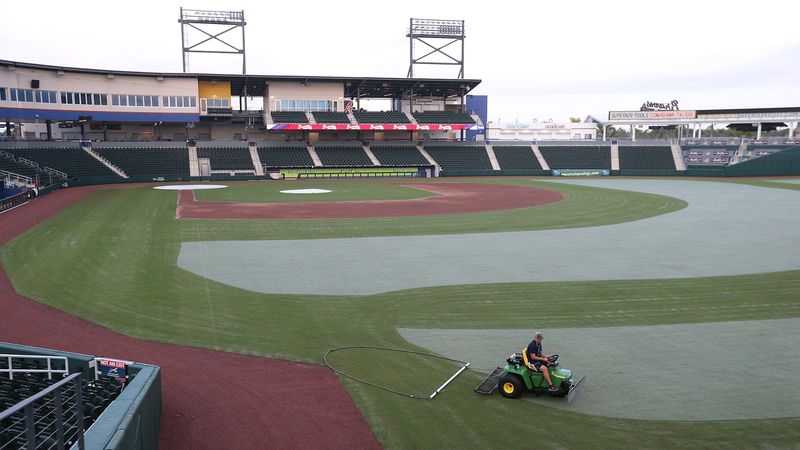 A member of the grounds crew prepares the field at CoolToday Park during the early morning on Feb. 12, 2020, in North Port, Florida.

Many fans in Georgia and elsewhere already have booked lodging and purchased tickets for trips to spring training.

Ed Stamper, a former Atlanta resident who now lives on St. Simons Island, has been going to spring training games of the Braves, Cardinals and other teams “just about every year” since 1981. He enjoys the warm weather, the casual atmosphere and the close proximity to the teams. He has tickets to more than 15 of this year’s scheduled exhibition games on his Apple Wallet app, including six in North Port next month.

“We had someone come in the office (last week), visiting here, and he said, ‘North Port has turned into a big town when you’ve got the World Series team here.’ We not only have the World Series champions, we have the team of the South. We brag about that all of the time.”

Stamper wrote a heartfelt letter to MLB, imploring the sport to “please get off the ledge” and resolve the labor dispute.

“We know it’s ‘just business,’” Stamper wrote in part. “Both sides want more money, and we don’t blame you. It’s the American way. It doesn’t take an MBA to recognize that closing up shop, while you are losing customers, is a strategy that will produce the opposite. The last thing a business with a declining customer base should do is force its remaining customers to stay away.

“… We suggest an alternative approach: Make building a loyal customer base mission one. Solve your need for more income by increasing the size of your pie – fans and viewers.”

The letter closed with these words: “Play Ball!”

Even though the Braves still haven’t had a full-schedule, full-attendance spring in North Port, Gunnin said the city has benefited from the attention generated by the team’s presence and from the use of CoolToday Park for events year-round.

“We had someone come in the office (last week), visiting here, and he said, ‘North Port has turned into a big town when you’ve got the World Series team here,’” Gunnin said. “We not only have the World Series champions, we have the team of the South. We brag about that all of the time.”

Taxpayer money covered $46 million of the cost of building the $139 million stadium complex – $21.3 million from Sarasota County, $20 million from the state of Florida and $4.7 million from North Port.

Homes continue to be built near the stadium in Wellen Park, formerly named West Villages, ranked the No. 5 top-selling master-planned community in the U.S. for 2021. A Publix-anchored neighborhood shopping center opened near the stadium shortly before 2020 spring training. North Port’s first new hotel since 1973 opened in December 2020, and several more are in the planning stages, Gunnin said. Ground was broken last summer on a mixed-use development, Downtown Wellen, that will feature an 80-acre lake, shops, restaurants and gathering spaces, also near the ballpark.

“That whole area has grown by leaps and bounds,” McDowell said.

“I know once there’s a full spring training, it’s just going to speed up the development more,” Gunnin said.

Amid the lockout, the Braves plan to proceed with a “World Champions Welcome Weekend” event inside and outside CoolToday Park on Saturday and Sunday, albeit without any of their current players in attendance.

The World Series trophy also will be on display, even if none of the players who won it are in North Port.

Braves retired numbers, including Hank Aaron’s 44, are placed in the plaza in front of the ticket windows and merchandise store at CoolToday Park in North Port, Florida. (Curtis Compton/[email protected]) 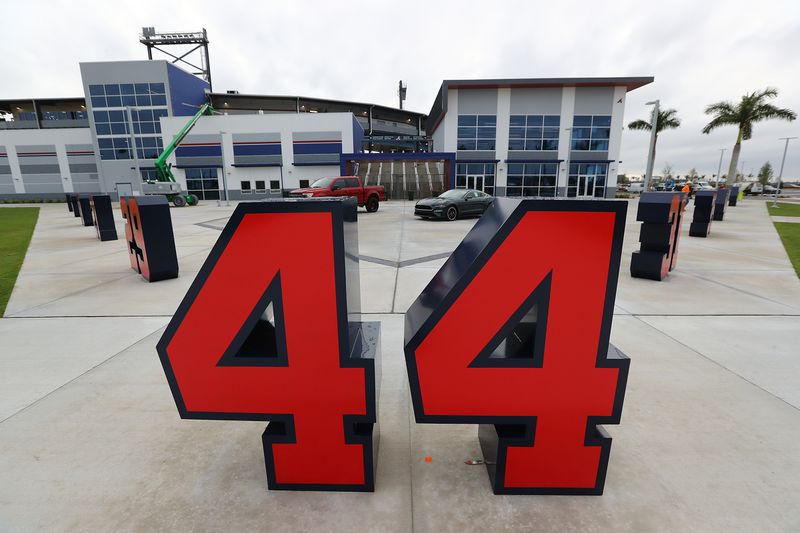 Braves retired numbers, including Hank Aaron’s 44, are placed in the plaza in front of the ticket windows and merchandise store at CoolToday Park in North Port, Florida. (Curtis Compton/[email protected])